Hardware and Software Solutions for UART over Ethernet communication

Definition and characteristics of UART


A universal asynchronous receiver/transmitter (UART) shouldn’t be confused with communication protocols like I2C or SPI. As a rule, it's a self-contained IC or a physical circuit in a microcontroller, the main mission of which is serial data transferring and receiving.

There is no better software for sharing distant UART over Ethernet than Serial Server Software. Installing this program on each computer within the network will connect UART to network and make the device attached to the serial port, together with its data and functionality, accessible for all the people in the network. 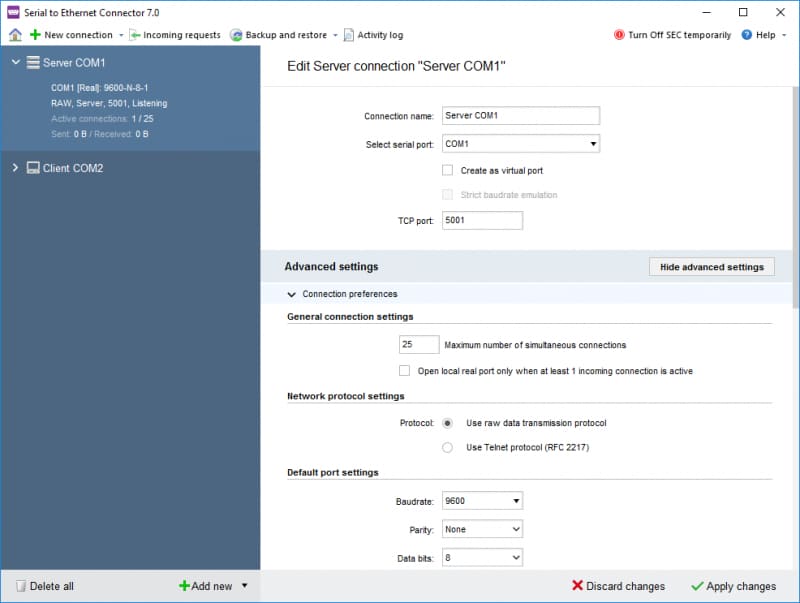 Operating serial port devices with the help of UART to Ethernet converter is the same thing as managing them when they are physically plugged into your computer.


You are all set. Now you can freely use the remote serial ports over network.

Serial to Ethernet Connector is fully compatible with Windows and Linux. Remark: UART to Ethernet Linux app is a command-line software at the moment.

To start working with a UART port, download and install the app, it will display a list of devices available to you, find the one you need and connect to it. Serial to Ethernet Connector enables access to UART over network, being the most comfort solution for your needs. 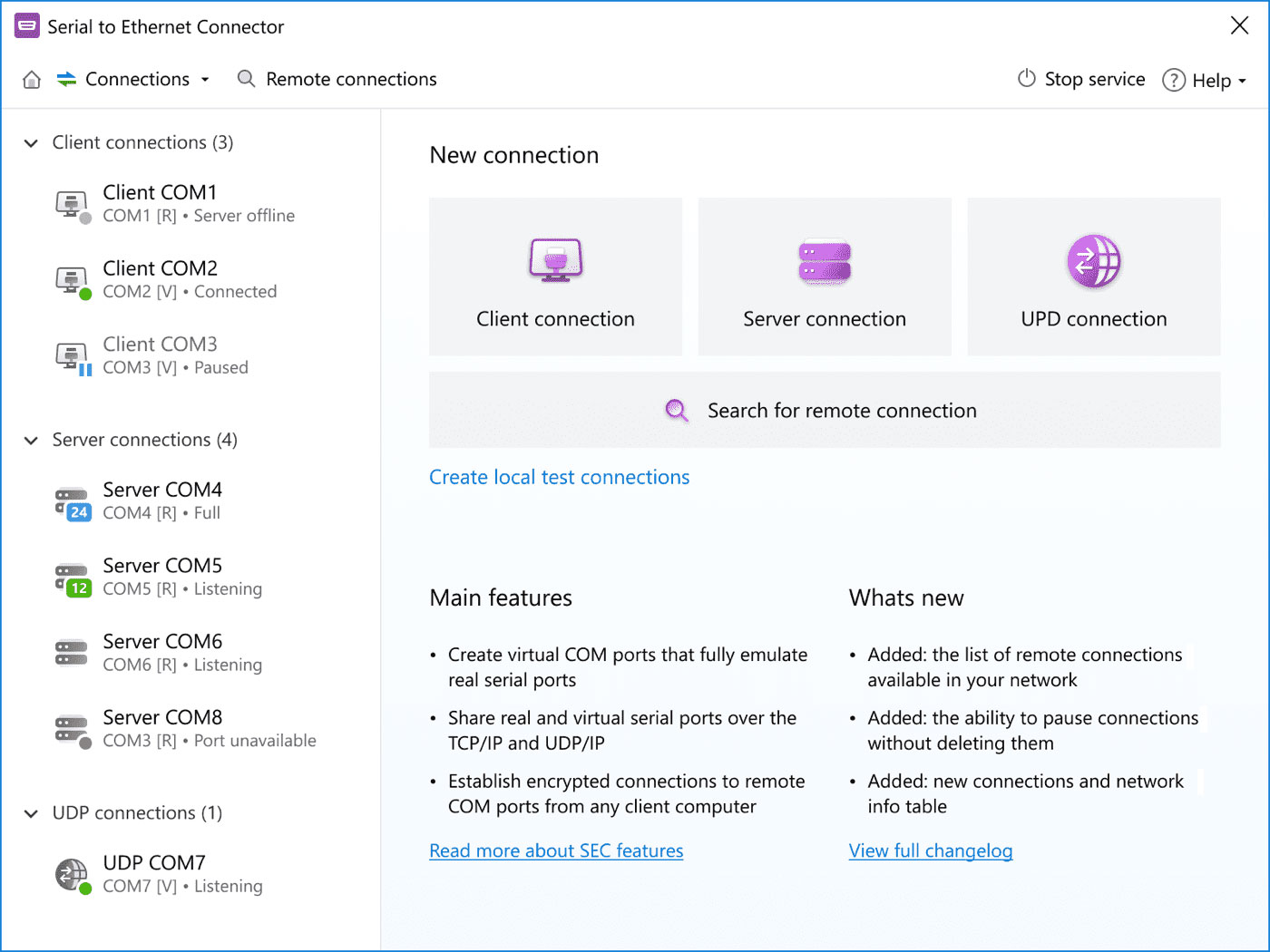 One of the primary advantages of UART is that it utilizes only 2 cables for data transfer between devices. UART communication is quite simple: UART1, after converting parallel data from a controlling device (e.g.: CPU) into a serial format, transfers it to UART2, which in its turn transforms the serial data back into parallel form for the receiving device. Therefore, data streams from the Tx pin of UART1 to the Rx pin of UART2 (see Fig 1). UARTs interact with each other directly, requiring only two wires for data transmission between them.

Data is transferred asynchronously by UARTs, that’s why there won’t be any clock signal for synchronization neither of the output of bits from the transmitting UART nor of the sampling of bits by the receiving UART. As a substitute for﻿ a clock signal, the transmitting UART adds start and stop bits to the transferred data packet to designate its beginning and end, thus letting the receiving UART know when it can start reading the bits.

Once the receiving UART spots a start bit, it begins reading incoming bits at a certain frequency, referred to as a baud rate. The baud rate measures data transmission speed in bits per second (bps). UARTs should both work at almost identical baud rate. At least, the difference between baud rates of receiving and transmitting UARTs shouldn't exceed 10 percent before the timing of bits gets too far off.

So, is it possible to share UART data over Ethernet? If yes, how to do it best?

When using UART protocol, you can easily track all the passing streams and save them into a file. However, if you need to work with a remote UART device, located within the Ethernet network coverage area, you can do nothing but utilize additional hardware or software.

UART TO ETH module, mostly utilized for﻿ transparent data transmission, seems to be a simple solution for communicating between UART and Ethernet. It is a serial TTL to Ethernet module that can be customized via web page. For TCP or UDP socket data to serial UART conversion a data transparent transmission appliance (USR-TCP232-T) is used.

To sum up, the aforementioned converter is an ideal solution for local networks and nearby devices. However, what should you do to access UART over Ethernet being far away, let's say, from some other part of the world? How can you employ UART via network?

A UART (Universal Asynchronous Receiver/Transmitter) is the programmable microchip used to control a computer's interface to its attached serial devices. It allows the computer to communicate and exchange data with serial devices by providing the RS-232C Data Terminal Equipment (DTE) interface. As part of that interface the UART also performs other functions.

There it is, a quick overview of UART. For remote UART access, there are basically two options. You can employ a hardware UART to ethernet converter or adapter. The second option involves achieving UART over Ethernet access by way of the Serial to Ethernet Connector software. This method of enabling access to your UART over LAN offers the benefit of not requiring any additional hardware. You can get UART to Ethernet connectivity without the need of any extra cabling, making it a more efficient solution.

The Ethernet protocol defines the principles by which PCs connected to a local area network (LAN) exchange data packets. The number of computers in the network can vary from 2 to several thousand. To connect with each other the computers use a "star" topology. That is, all devices (PCs) are interconnected by means of a switch - active network equipment.

The physical transmission medium for Ethernet protocol is a cable. Most often it is a copper twisted pair, a fiber optic cable, or their combination when it comes to FTTx. RJ-45 is used as a connector for an eight-core (2x4) twisted pair. The socket for Ethernet plug can be the input of any network card in a PC or router. To avoid the loss of signals, the length of a twisted pair cable should not exceed 100 m, whereas a fiber-optic cable should be no longer than 10-70 km (depending on its type). The maximum data rates are 100/1000 Mbit/s correspondingly.

WHAT IS SERIAL PORT?

Serial ports are 9-pin connectors that transmit incoming and outgoing information - one bit at a time. Throughout most of the history of personal computers serial ports were used to transfer the data from computers to various devices. Before internal modems, there were external ones and they were connected to computers via serial ports, aka communication or COM ports. The same with mice and keyboards.

Serial ports are controlled by a special chip - UART (Universal Asynchronous Receiver Transmitter). UARTs are serial chips on the computer's motherboard (or on an internal modem card). On older computers like many 486's, the chips were on the disk IO controller card.

When all computers had parallel bus architecture, the UART's role was to convert bytes from the PC's parallel bus to a serial bit-stream. 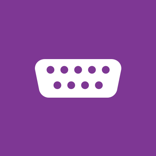